Celebrities pass away. They are just like us, after all, despite their fame and wealth. There are some celebrities whose deaths feel tragic to almost all of us, usually because they were famous for so many years that multiple generations of people were adoring fans. There are some celebrities with more niche fan bases, and their deaths are obviously sad to those outside of that fan group, but not a shell-shock of a moment.

Today, Naya Rivera’s body was pulled from a lake where she had rented a boat with her son, who is thankfully, incredibly, uninjured.

The name Naya Rivera may sound familiar, it may not. Maybe you recognize it from her biggest acting title, “Glee”. She was, as I’ve heard countless people refer to her, “that cheerleader on Glee”. To me, she was so much more.

I think the first time I saw a picture of Naya Rivera (as Santana Lopez, that cheerleader) was on an AfterEllen.com article. If you know AfterEllen, it was THE website for everything Sapphic in media back in the day (today sadly it’s a shell of it’s former self, spouting “terf” nonsense, but that’s a separate article for a separate day). The article in question at the time was covering a scene in the first season of Glee, where on a group call Brittany and Santana (walking next to each other while on their own phones in the group call) have this exchange with the group:

Santana: “Sex is not dating.”

Brittany: “If it was Santana and I would be dating”

The group takes a moment for that to land, and then the scene continues. A throwaway line, a joke, a quick moment to suggest that two cheerleaders in high school were having sex meant to illicit a laugh from the audience, primarily at the group’s response.

But not to the Sapphic savvy. To myself, a young college kid still grappling with my sexuality and looking for any bite of queer media to consume, I was now interested in this show I had scoffed at when commercials first aired. A musical comedy about a high school glee club? I was going to have to watch that for a fix of two female characters who were having sex, but nothing else about their relationship had come up before this? I was grasping at straws, but I was in it now.

I’ll try to spare you all the literal essay I could write about the fictional couple, but Brittana (Brittany + Santana, duh!) became my obsession. Sure, I watched the episodes of Glee in full, but I lived for any moments where the two characters interacted with each other, or even talked about the other. When people asked me if I watched Glee, I would give a clipped “yeah” and bite my tongue before going on a rant about the latest episode. I joined Tumblr after scouring the internet for other queers to discuss the show with, and found what I realize now was my first real queer community. It’s not uncommon for members of the LGBTQ community to find their first, well, community in online forums and/or social media sites, and yes, I found mine in the Glee and specifically Brittana fandom.

The show did not treat my girls well, to say the least. I won’t get into that now. But the aches and pains of Brittany and Santana were my aches and pains. Santana had many beautiful songs and scenes dealing with her feelings for Brittany and her coming out process (Brittany was more “free-spirited”, but Santana was the one who struggled, and got more focus).

Naya Rivera had fun with her character, for as many serious scenes she had, she had twice as many hilarious quips and devious plots. She also treated Santana with such respect, and understood the weight the character had in the queer community. I remember being in awe of her voice, her beauty, and her talent.

I try not to think about Glee these days. I have a lot of negative associations with it, because online fandom can be pretty nasty at its worst. But five days ago, when Naya Rivera was first reported missing, and presumably had died in the lake her rental boat was on, a large knot settled in my stomach and the floodgates of memories burst open. It is alarming to think of how greatly this actor impacted me, but it is true. Naya Rivera played a big part in my life for several years. She inspired me, she made me cry, she made me laugh, and she connected me with many people literally across the world who I still consider friends today.

It always feels strange to mourn the passing of a celebrity. I didn’t know Naya Rivera personally. It feels selfish to think about myself in regards to her death, when I know her family and friends are mourning, and struggling to come to terms with their new reality. Yet I too feel I have lost someone. I guess I can’t truly put to words what that time of my life meant to me. I had felt alone in my newly discovered sexuality, but found comfort, joy, and visibility in Naya’s portrayal of Santana. I found community with others who felt like me.

I never got the chance to thank Naya Rivera for the joy she brought me on that silly little TV show, and I never will. But I will say it anyway. I know you were and still are so much more than the character you played, but thank you for giving me and the LGBTQ community more than I realized. I will always hold you in my heart, and I hope your family and friends can find a way to begin to heal. Thank you, Naya Rivera. 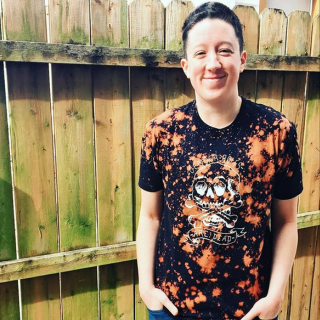